History of Makeup: The Origin of Makeup

History of makeup: the origin of makeup : If you are Interested in the word, Makeup. Then you surely want to know its history. Since ancient times it has been used as an artistic manifestation. Throughout the time it has been present in aesthetic trends. We explain how it was born and how it has evolved to become what it is today. Attention to this article to know in depth the history of makeup.

The Origins of Makeup. Prehistory and Ancient Egypt

Human beings have long used color as an aesthetic element of verbal communication to highlight aspects of their anatomy, to produce certain effects on behavior or simply to transmit moods.

The origin of makeup dates back centuries, specifically to Prehistory. In this period clay was applied to the face but it is not clear what the purpose of this action was. According to cave paintings of the time, Paleolithic women colored different parts of their bodies with reddish brown.

In ancient Egypt, black and green powders were used by men and women interchangeably to paint their eyes. His ideal of beauty was a tanned skin, large eyes outlined in the shape of a fish in dark color, lips colored in terracotta tones and very careful eyebrows as we can see in the busts of the time.

In addition to sun protection, people believed that   makeup  also protected them from disease. They were not wrong since the black kohl and other powders they used on the eyelids contained lead salts that strengthen the immune system.

Some historians considered Egypt as the cradle of makeup. To obtain the color with which the eyes were painted, they mixed earth, ink and ashes. For the lips the Egyptians used a dye made of red ocher and natural iron oxide that they applied with a brush.

In the tombs of the pharaohs, remains of cosmetic products were found that were not far from the current makeup. In fact, the current rouge derives from a mixture made in Ancient Egypt that consisted of seeds, red ocher and different fruits. 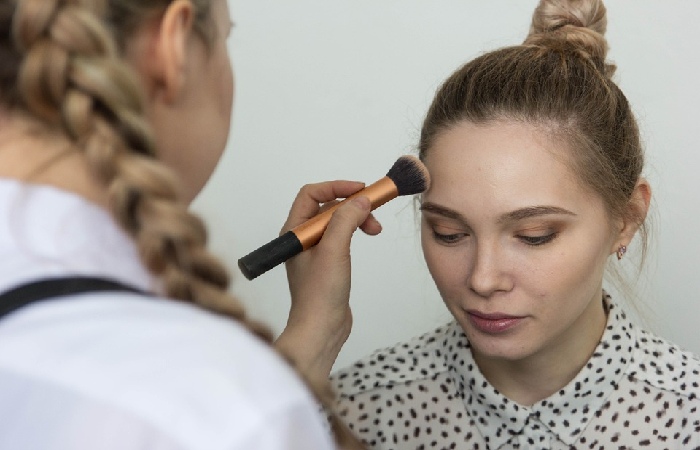 In the Middle Ages, personal care in women was frowned upon so makeup took a back seat. However, with the arrival of the Renaissance, makeup is transformed.

At this moment the ideal of beauty is that of a woman with a curved body with whitish skin, sparse eyebrows and a very clear forehead. Makeup is applied to the eyes with Khol and a maroon type of blush is usually used, the eyelids are colored with blue or green and the lips have intense red colors in the shape of a heart.

In the Renaissance, cosmetics returned with unusual strength. The feminine aesthetic envelops the life of Renaissance Italy.

In the 16th century, the monks of Santa María Novella created the first great laboratory of cosmetic and medicinal products. The first cosmetic and beauty treatises appeared in France and Italy during these centuries. In the 16th century, English nobles made the use of lead makeup fashionable. Queen Elizabeth I herself applied it to cover her smallpox scars. In his court, sage was popularized to whiten teeth and geranium petals as lipstick and other mercury-based products to color them.

The Triumph of Pale Makeup

In the 17th and 18th centuries there was an obsession for pale faces. Dusted with talcum powder or rice flour powder on the neck and neckline and some stains such as artificially painted polka dots.

France set the canon of beauty. Showing oneself with colored eyes and cheeks was frowned upon. So in the absence of blush, the skin was pinched so that the blood pigmented the cheekbones.

The eyes and eyebrows were highlighted with charcoal. Maiko (Geisha’s apprentice) also wore red around their eyes. The lips were painted with a brush establishing a heart-shaped outline above and below.

Hairstyling and makeup games for boys and girls

Broken Makeup: How to Fix It Quickly and Easily